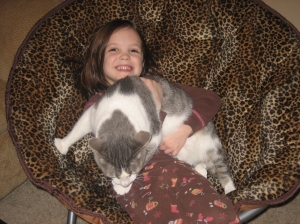 This has been a difficult week. Our cat Captain has been sick and this morning we had him put down. This picture isn’t the best of him but it’s one of him with our granddaughter Emma who is Captain’s real owner. Here is the back story…

We had decided we probably wouldn’t have another pet. Pets are great but we aren’t your typical animal lovers and really weren’t cat lovers. You’ve heard it said that you will do anything for your grandkids and we lived that out with this cat.

Emma called her Nana one day in tears and heartbroken. She had just been diagnosed as allergic to cats and she loved Captain dearly. She called to tearfully ask Nana if we would take Captain so he could remain in the family and she could see him when she came to visit.  Well, what are you  gonna do? We didn’t want a cat in the house and didn’t particularly want the responsibility of caring for a pet. Nana told her we would think about it and after 30 seconds we said yes. What are you gonna do? After all it’s Emma and we do anything for our grandkids.

That was a few years ago and through the years we got very attached to Captain. After our daughter Brooke died in 2013 Captain really became Nana’s buddy. We quickly learned how therapeutic animals can be. Captain gave Viva a world of comfort as he sat with her in her recliner by the hour.

He was de-clawed in the front so he stayed indoors a lot. But did he ever enjoy being outside! He was quite the hunter dragging mice, birds and other varmints on the deck for his pleasure.

I just wanted to write this little tribute to  Captain and thank God for creating him. I can’t help but think that in the next life we’ll see him again. You may think that’s silly but after all cats do have nine lives!

One response to “CAPTAIN”